She is amazingly tight and looks in better shape than Ricochet did when I viewed her.  I'll be getting her in the shop as soon as the transport company can get her to me.  Here is a post I did about her with some photos.

More to come when I get them.

7/31/10
Ah yes, the restoration of Lady J starts in earnest. First we pulled the little Kubota that hasn't fired in over 18 years.

It spins freely, seems to have good compression and has both compression relief and glow plugs. My big old Perkins has neither. The heat exchanger is toast.

While the boys worked with heat guns on the paint, wooding the old girl, I went after the seams. This job is not entirely painless.

The compound the previous folks used is like an epoxy, hard as a rock and sticks well to the wood on whatever side it stuck to. I have to chip it loose and then reef it out. I'll post a video tonight showing the painful, tedious process.

Sometimes I get lucky with a long run, usually not...

There were some dubious repairs done to her in the past, such as this thru-hull plug with fasteners set in seams. I'll have to scarph in planking to fix that.

They also has drilled holes in the shaft strut in order to make sure the goop they faired it with stuck. C'mon..., drilling holes in perfectly good, irreplaceable bronze for THAT? Somebody needs an a$$kicking...

Of course, the goop they stuck on caused it's own issues that I'll have to deal with.

The seams do clean up nicely, if well opened. Seeing as how see has 9" centers on the ribs, I'm not worried about caulking too hard. This is the best built Kettenburg I've yet seen, much stouter than the K-38's or PCC's.

More shoddy work in the sisters and transom where they didn't sink the fasteners enough to set bungs. I'll have to fix this, especially on the transom where she'll be bright.

The boys have been making good progress as well.

So, all in all, it's been a bit tedious but steady. She'll go inside the shop next week for further work as the yard gets nervous with all of the scraping and carrying on we're doing. We do vacuum up a couple times a day though. Yes, that's right. We vacuum pavement and dirt to clean up the paint chips. I reckon we have the cleanest dirt in the PNW....
8/8/10

Here are pictures of the broken and cracked ribs either from old age or the transit.

The hull is coming along nicely. 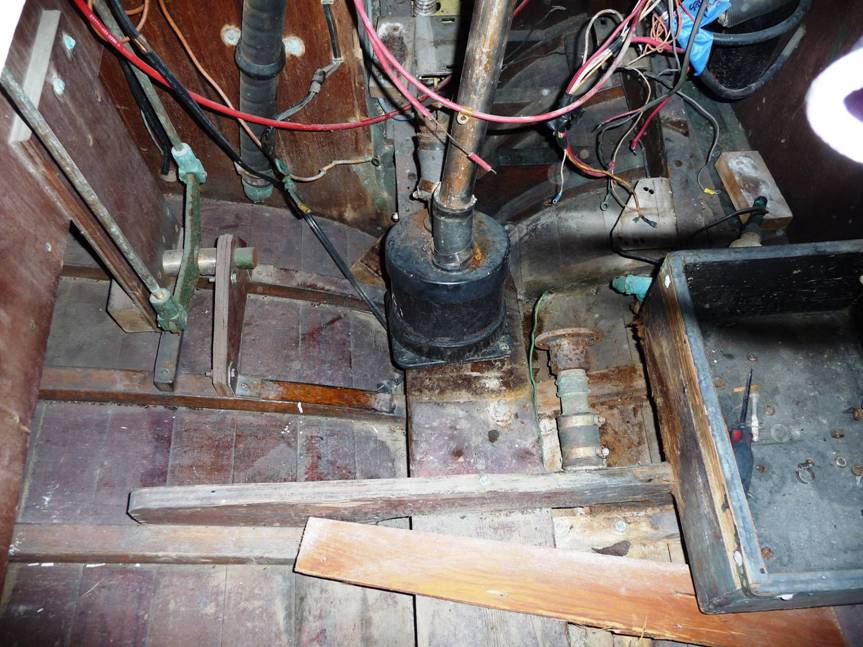 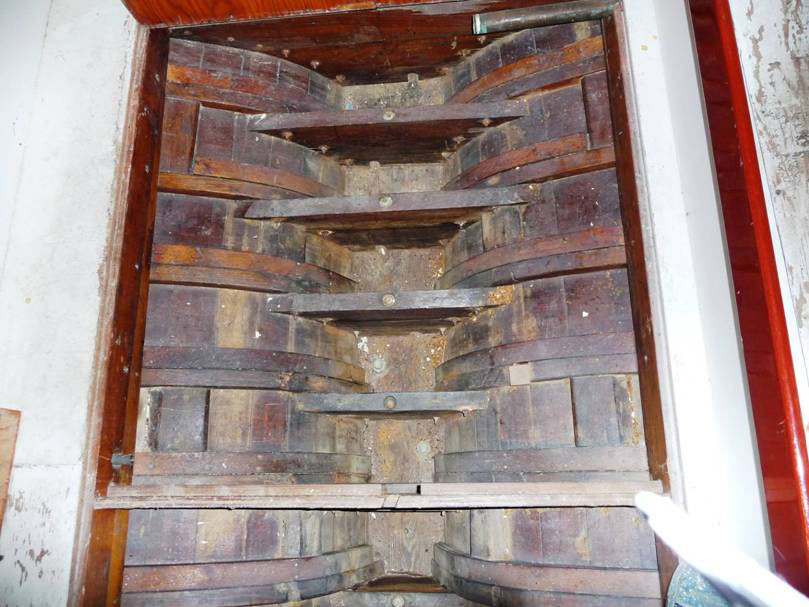 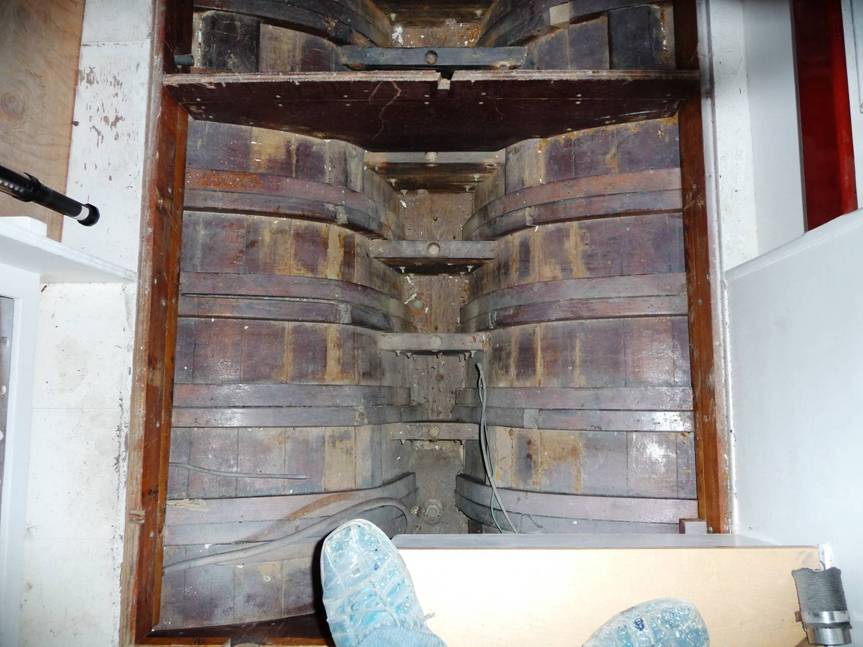 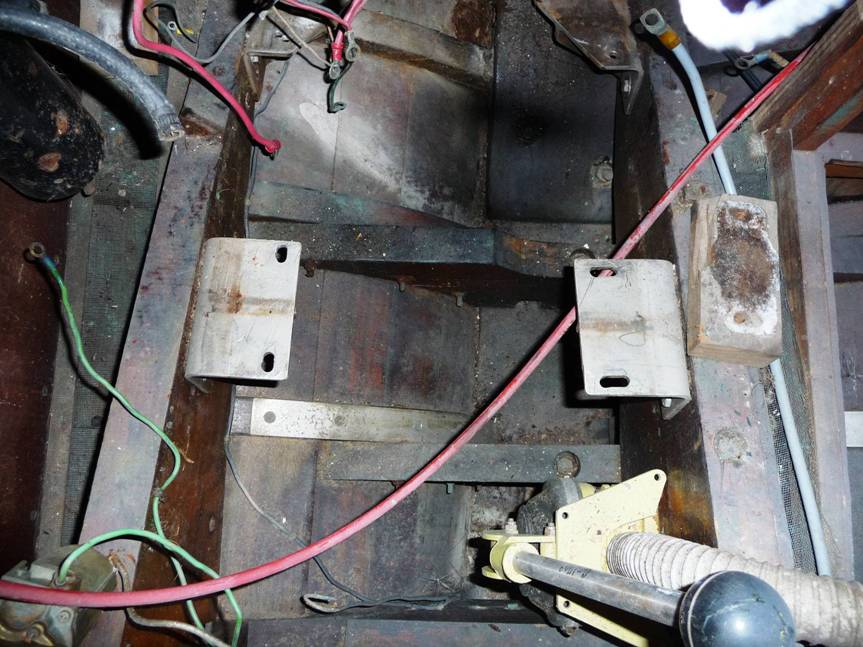 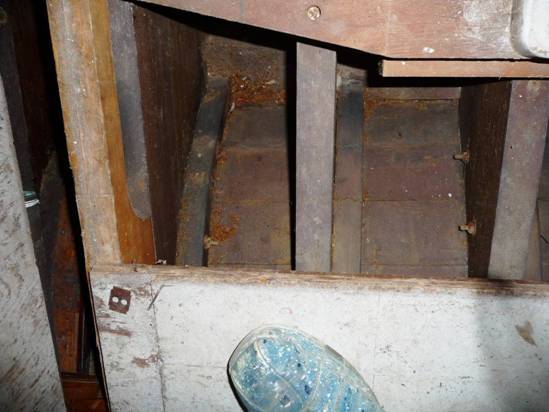 We've been busy trying to finish the hull on Lady J. The framing is finally completed and the bilges almost so. The boys have been working on the house today, stripping that hideous red stain as much as possible.

Still looks kinda orange to me... The hull is detailed and ready for stain, mostly. I put some on to see if the customer likes it.

I didn't like any of the stock colors so what you see is a two step process. The base stain followed by a light wiping of a Mahogany Red stain.

I still have to hand make this rudder trim piece from that gorgeous chunk of Sapele.

Things are heating up quickly.
9/15/10
Another week gone by, mainly on finishing the seams, well, almost. We ran out of seam compound when UPS didn't deliver like they said they tried to do. We were there all day and no UPS delivery attempts were made. Regardless, the seams below the waterline are done and about 5 hours worth of work will finish the rest when our materials finally show up. Here's a shot of the bow.

I will surely be happy when these seams are completely done. It's been a chore beyond compare. There's paint in the bilges but it's not ready for prime-time yet so those shots will have to wait till next weeks update. One thing we found is absolutely not a single valve on any of the thru hulls. Just hoses. We'll be changing that....
9/15/10 b
After I bought two more multitools (Rockwell) the job of clearing out the old seam compound went much faster with three guys working it. I was still using my tool for rib replacement. We used a semi-circular sanding blade to get all of the residue out and prep the seams. Yesterday, we started paying the seams with cotton, both eight strand and cotton. Some of the places where the seams close up, you'd have to separate strands out and do those only to rejoin strands when it opened up again.

This afternoon, I started applying seam compound. Nasty, NASTY stuff to work with. Very stiff and clay like. It doesn't like sticking to the inside of the planking and will sometimes fall out just when you think ya have it set. Very oderifous as well so ya know you've been at it too long when ya can't smell it anymore.

Yeah, that's pretty ugly but I'll clean it up tomorrow after it's cured a bit. Jay was on the same side still paying seams further up the hull.

He came in with a Samurai topknot today, interesting doo. Zach was forward finishing the seam along the stem post that runs all the way from the back of the keelson.

Charles was hanging out by himself to Starboard working seams.

Me? I was relaxing some kinks after laying in that section of compound. My hands were sore today.

Them there Boys get to join the compounding fun starting tomorrow.... Anyways, that's another week and at least it looks like we're making headway at last.
9/15/10 c
Time for an update. Some of the issues faced this week are iron sick floors, sprung planks and a bad plank, along with the seam reefing and detailing of the planks for varnish. I picked up a nice piece of Sapele for the bad plank and took care of it today.

I cut the piece and fitted it in with shims at first.

I bored the new screw holes prior to glue up and then mixed epoxy and mahogany sawdust. I set the scarph joint with screws and let it cook a bit before I had big Zach press the new plank flush while I drove screws.

It flushed out nicely.

I should do these last three salon ribs tomorrow.